I am Saito, who arrived at the Advanced Energy Engineering Division on October 1, 2018. I worked at Max Planck Institute in Germany until September. In my first blog this time, I would like to introduce my research life in Germany.

The Max Planck Institute is a research organization in the field of basic science in Germany and there are 84 independent laboratories specialized in the field of “scale and nature-hard to study at university”. Among them, the Plasma Physics Laboratory (IPP) has two bases in Garuhin in the suburbs of Munich in the south and Greifswald facing the Baltic Sea in the north. My formal affiliation belongs to IPP Greifswald and I worked under the Danish boss who is the head of the Stellarator Surrounding Plasma and Divertor Physical Division. “Stellarator” is one type of fusion device, and Japan also has a large experimental apparatus similar to Nuclear Fusion Science Institute in Gifu prefecture. IPP’s Wendelstein 7-X is the world’s largest device completed in 2015. 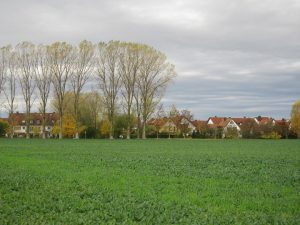 Distant view of the streets of Garuhin in southern Germany

However, my research theme was not directly related to the stellarator and I was engaged in basic experiments using positron (antiparticle of electrons) at Garuin. In Garuin, in addition to IPP, there are also Max Planck ‘s Quantum Optics and’ Extra – Earth physics’ laboratory, Munich Technical University (you may have seen pictures of a huge slide in the building) Education and research institutes such as the Headquarters of the European South Astronomical Observatory line up and say that 20,000 students and researchers are active in the population of 18,000 in the town.

Munich Technical University in Garuin is driving a research reactor with a heat output of 20 MW as a neutron source, and there is a group that uses positron beams to use this neutron beam to use for the study of surface science. The fact that such positrons can be trapped in a dipole magnetic field like the Earth’s magnetosphere for an extremely long time was demonstrated by a pure electronic plasma experiment using the RT-1 instrument of Yoshida-Nishiura Laboratory at Advanced Energy. By confining positrons with the same number of electrons, experimental research on a new type of plasma called “pair plasma” becomes possible. 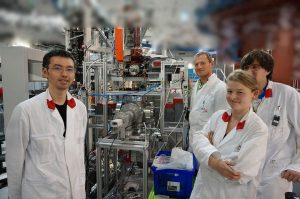 For launch of a positron plasma experiment using a dipole magnetic field, I moved to IPP Garuhin in 2013 and lived in Germany a little over 5 years. As I grew up with pure domestic products, I felt a very impressed faith in “language” as a habit of Germans who touched me in research and daily life. Regarding research procedures as well, it takes time to explain even minor things logically on each occasion and decide on a negotiating basis, it takes time, while on legitimate requests And there was sometimes accepted. At the time of the experimental work, we discuss the finer points first, decide the plan, after reaching an agreement, we will finish the work at a tremendous pace according to the plan (And in the evening we will go home after finishing work, It is early) has a tendency. In Garuin experiments, positron injection testing using prototype equipment in the photograph has finished one stage, and development of new dipole magnetic field devices by superconducting coils is ongoing.