Opportunities for students to participate in artificial satellite development (Koizumi lab)
Posted by ae on 10-20-2018 in Research, Blog
0 Comments

As a project we have participated so far, there was development of the small satellite “PROCYON” in 2014. PROCYON is the world’s first deep space exploration satellite on a 50 kg class small satellite. As Koizumi Laboratory, we developed ion thrusters, which are propulsion machines, and demonstrated the operation in the universe.

The ongoing project is the development of “AQUARIUS” which is the propeller of the 6U Ultra small satellite “EQUULEUS” (confusing). For more information on EQUULEUS, please see the following URL.

EQUULEUS has been selected as the secondary payload of the first large-scale rocket “SLS” under development by NASA, and has been developed jointly by the University of Tokyo and JAXA and universities since 2016. The main mission of EQUULEUS is the demonstration of orbital control technology in the sun – earth – moon zone. Toward the Lagrangian point behind the moon which is the destination, we will control the orbit by combining the operation of the moon swing bye and the propulsion machine well. The propeller used in that case is the water resist jet propeller “AQUARIUS” developed by Koizumi Lab. AQUARIUS is categorized as a propeller of a type called resist jet, and the point that water is used as propellant is epochal. The resist jet is a simple one that heats the propellant by Joule heat and discharges from the nozzle, and it is suitable for small satellite. By using safer and cheaper water, we are improving the ease of development. At present, AQUARIUS has been assembled in advance, and it is improving until joining with the satellite side.

Numerous tests will be carried out between the assembly of the satellite and the launch. In addition to function and performance tests, stress tests are imitated that simulate the environment where satellites are exposed until launch to operation, and it is necessary to pass all the tests. Examples of stress include vibration, shock, electromagnetic waves, thermal vacuum, thermal cycling and so on. Also, if environmental tests are performed only after assembling the entire satellite, it will be difficult to deal with when a problem occurs, so we will preliminarily test each component.

As one of the tests mentioned above, we will introduce the opportunity to participate in the vibration test of the propulsion machine AQUARIUS. 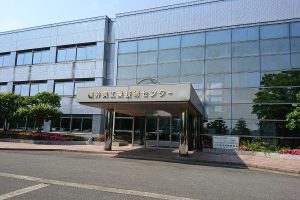 The vibration test was conducted at Fukui Prefectural Industrial Technology Center. The Center has introduced a number of test equipment for the purpose of supporting companies in the prefecture, and there are large vibration excavators in it. In addition to AQUARIUS, I have taken care of many times even in the development of EQUULEUS. 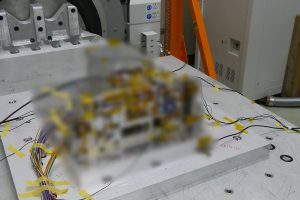 The lower plate moves back and forth, and AQUARIUS is excited at the prescribed acceleration.

Initially it was scheduled to finish in about 4 days, but trouble that parts can not be attached after reaching the site, reworking the parts, inviting cheering from Tokyo, struggling, the schedule slumps It went on. If the vibration test was not carried out correctly, it was accompanied by the risk of destroying AQUARIUS itself, so it was a day when I felt pressure.

The critical launch of the satellite is based on NASA ‘s SLS rocket scheduled, and is scheduled for 2020 now. I would like to keep doing my best so that you can deliver the bright news of EQUULEUS successful launch, successful operation, to everyone! !