Ogawa laboratory It is Mr. Yokoyama of 2 years of laboratory. Late term (A1 term) also started, the autumn wind is beginning to blow, but this time we will report on the European Physical Society (EPS) which we participated in July.

This year’s EPS was held in Prague, the capital of the Czech Republic. Prague is also said to be the most beautiful city in the world. If you walk on a stone-covered road, red-roofed buildings stood on white walls on both sides and you could enjoy exoticism by walking. It was enough to be overwhelmed by the beautiful cityscape, even a short while walking down the road from Prague to Prague early in the morning of the first day of the conference (due to aircraft troubles etc).

The conference was held at the venue on the island floating on the Moldau river over a period of 5 days. In addition to attending a large number of lectures, I also posted a poster of my research content. My research theme is “Prediction of plasma annihilation phenomena using machine learning”, but the current situation is that few researchers study closer themes in the country. In this EPS, however, we were able to exchange meaningful opinions with the researchers who are conducting similar research at local universities in Prague and MIT in the USA. 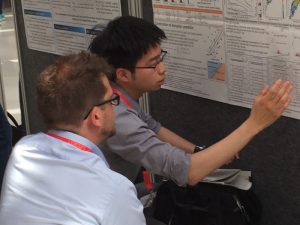 Well, EPS was held in July, it seems a bit late to pick up, but there are actually topics related to recent topics. In the vicinity of the venue Prague there is a research facility using ELI-Beamlines (Eli beamline) with ultra-high intensity laser, Professor Ogawa also participated in a tour of this facility. Laser intensity is 10PW (petawatt), and it is top class worldwide. For this ultra-high intensity laser, the technology called CPA (Chirped pulse amplification) which was awarded this year’s Nobel laureate physics award is applied. 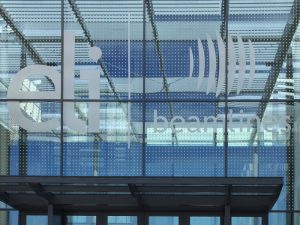 There are various application destinations of such ultra-high intensity lasers, but one of them is actually “fusion”. By using a method called “inertial fusion”, a fuel pellet is irradiated with ultra-high intensity laser to cause a nuclear fusion reaction to generate electricity. The “fusion” we are studying is a research field that can not be realized without international cooperation. From now on, we will continue researching not only in Japan but with researchers all over the world.