Hello!靖 I’m Tanabe from Yasushi Ono Lab.
From this year, with the support of the university’s “International Development Project for Young Researchers”, we have had the opportunity of long-term overseas study.From July, we joined the Column Research Laboratory in southern Oxford, UK, and an organization called Tokamak Energy, a nuclear fusion venture. We have been dispatched. I had just returned home the other day, but when this article was released, I was probably returning home. Since this is the first time of a local report, this time I will briefly introduce the state of local life.

The Department of Advanced Energy Engineering has many laboratories in the field of plasma and nuclear fusion, but the Column Research Laboratory has one of the three major tokamak in the world, JET, Takase, Ejiri, Tsujii Lab (Complex Science and Engineering), Ono It is well known for having the world’s largest experimental MAST in the spherical tokamak method that works in the well laboratory. The institute was particularly helpful as a destination for studying abroad when enrolled in a doctoral course, but as of 2019 it has been upgraded to MAST-U and experiments will be resumed next year or later. We are mainly involved in the ST40 experiment of Tokamak Energy, a fusion venture launched by the founding members.

This institute is a research institute that has similarities in “Spherical Tokamak” and “Plasma Coupling / Magnetic Reconnection”, which are the keywords of the research field of Yasushi Ono Laboratory. Compared with tokamak, which has a long history in fusion research, spherical tokamak, which has been pioneered since the 1990s and 2000s, is still in the mid-stage development stage of medium-sized equipment with an order of magnitude lower temperature than large equipment such as three major tokamaks However, the Tokamak Energy ST40 extends this to the order of 1-10 keV, exceeding the design parameters of the world’s largest MAST NSTX (Princeton, U.S.) and its upgrade system MAST-U NSTX-U. Very ambitious research and development is underway for the first 100 million-degree high-temperature experiment.
(For more information about the activities of this research institute, please see Mr. Ono’s article on April 4 of this blog and the research institute’s website. tokamakenergy.co.uk/ This time, I will tell you about local life here.)

The local research life is basically a morning type. When I noticed that my research at the university tended to be night-time, most people came home from about 8-9 o’clock in the morning to about 16-18 o’clock. This style is so thorough that it ends at around 18:00 no matter how much you want to experiment, so basically you need to come early in the morning if you want to earn some research time. During the study abroad period at MAST, an experiment meeting started at 8: 15.After confirming simple check items, entry to the experiment building with MAST equipment was banned by 9 o’clock in the morning. It stopped at that time and ended, then the style of analysis. Tokamak Energy is a company, but the same applies here.If you do not complete the power-on and setting changes of the experimental equipment brought in by around 9 o’clock, the settings that cannot be remotely controlled can not be easily changed during the experiment, so naturally Life rhythm becomes morning type. In the sense of being in Japan, it was easy to concentrate on my work after 18 o’clock at night, but in the EU labor management is thorough, and even if you are in the office, you are not allowed to stay alone, When I tried to stay without prior application, the staff was unable to return and was warned several times as a problem. Tokamak Energy is a venture funded with a large donation of over 50 million pounds, so managing the corporate image is one of the life and death issues, and maintaining a white environment until the desks around the living room / office are organized Was thorough. Thanks to these efforts, the staff supporting the institute are cheerful and very motivated, and the whole institute has a positive atmosphere.

Tokamak Energy’s ST40 experiment completed the test operation in the first year after the first plasma generation in 2018, and from the second year the center solenoid coil (operation started in July) and the neutral beam injection device (the first unit was completed in summer We are gradually improving the high-energy experimental environment while proceeding with the installation of (planned). The measurement system is not yet fully equipped with temperature and density measurement systems, but temperature measurement is indispensable for conducting plasma heating research, and Tanabe is also in charge of the design and local construction of ion doppler tomography measurement systems through this dispatch. In this way, we are working to establish a foundation for research promotion with the cooperation of local business. With the start of dispatch in July, the development of the spectroscopic optical system for test measurement has been completed and the acquisition of test data has begun.However, the measurement system has been fully prepared for the next vacuum break by modifying the device port for tomography measurement. We will start the detailed heating research when we proceed to. This time is the first time writing, so I will only give an overview introduction, but I think that it will be in the middle of the stay period next time the writing staff turns around, so I will tell you a more detailed situation of the site I hope you can.

* The photos for uploading to the blog were the ones at the research site and photos while enjoying the ale at the local pub. Since the return time for lab life is strictly regulated, if you try to be able to “ go home until you have completed the work you are doing now, ” When I return to my room after **, at 17:40 … “, I can be strongly conscious of how to use the time of the day in time increments. In the English-speaking life, the process of continually proceeding with the ticking to-do list in my mind until the countdown of the end time goes on one after another for a week, with considerable exhaustion and going to the end of the weekend However, the beer feels very delicious. It’s good to have a cup of rushing while watching soccer, another dish coming out, another liquor progressing, and another one to enjoy individually, or on a day without experiment it is good for everyone to go out, so I posted such everyday pictures . 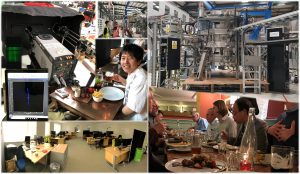