My name is Hattori, my second-year master’s degree in Koizumi Lab.

The year is over, but I would like to talk about last year’s laboratory special lectures and year-end party.

Koizumi Lab, to which I belong, holds a special lecture and year-end party in conjunction with Koshiba Lab, who belongs to the engineering aerospace engineering department, every year. This is a big event once a year, and there are many OBOGs from the laboratory every year.
At last year’s special lectures, I received comments from students’ different perspectives on their research presentations and heard many useful stories, such as thinking in the field in which I was working. Also, a hot discussion was held at each presentation, which was a very exciting lecture. Although it is once a year, such a valuable opportunity is an opportunity to further enhance the laboratory.

The year-end party was held with about 40 members and about 30 OBOG members. Among them, hot discussions were held about current research activities and future space development, and sharing of nostalgic episodes in the laboratory and the like was very exciting.

In addition, there was a report that I would like to thank at the year-end party last year. This is Assistant Professor of Tohoku University, Mr. Saito, who was a research associate at Koizumi Lab. Mr. Saito will greatly support the satellite development project which was also on the blog that Yoshitake of Koizumi Lab M2 has updated, and learn about various things such as the way of the laboratory and the ideal state as a researcher Thank you. It would be a pity that we would separate from those who have always been working together, but I think that having the liquidity in the science industry and conducting activities at various bases by researchers will lead to the development of the entire industry. I would like to look forward to further activities of Mr. Saito. 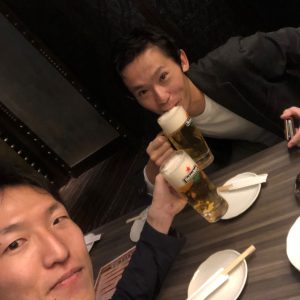 In this way, I think that laboratory activities are developed not only by regular research but also by connections outside the research laboratory. It was a day when I thought that I should not forget to actively take things outside the laboratory and contribute to the outside, because this is a specialized research that tends to be closed internally.