Research experience in the United States

Research experience in the United States
Posted by ae on 08-29-2019 in Blog, Lab-life
0 Comments

Hello, I am Ryota Sano, a 2nd-year graduate student at Suzuki Laboratory.

In this article, I’d like to talk about the research experience for about half a year from the middle of last September to the end of this March. The “Tobitate! study abroad initiative“, founded by the Ministry of Education, Culture, Sports, Science and Technology, subsidized the expense during the stay. I visited the Texas A&M University in Texas, UA, and stayed in Plasma Dynamics Modeling Laboratory. In the laboratory, I continued my master-thesis research on Electric Sail  and advised by Professor Hara. As you can guess from his name Professor Hara is a Japanese, but except for the greetings of the first day and final day, we had communications in English. I felt a little bit awkward because we spoke in English even when we were alone in the meeting. Each laboratory did not have its own student room, but multiple laboratories shared one room for their students. Most students go to the lab about 9 o’clock in the morning and go home before the sunset. I think it is due to not only the difference in the policy for labor from Japanese but also the fact that it is not so safe at night in the United States.

Next, I will briefly explain about Texas A&M University. Texas A&M University is located in College Station, TX, and is the oldest higher education institution. The number of students amounts to about 70 thousand, which is the largest one in the United States. The College Station city is a rural area, and public transportation is not so convenient. Therefore there many free shuttle buses to the campus from various places in College Station. I also commuted by that bus. By the way, the bus did not precisely run with the schedule in contrast to Japan, and I need to constantly check its place information online when going to the bus stop.

During the stay, I joined the practice for the Kendo club at the university. We practiced twice every week, so strangely, I practiced more than I do at the university in Japan. I was impressed by the beautiful technique of the captain of that Club and learned the high level of Kendo in the United States. In fact, in the world championship in 2006, Japan was defeated by the United States and Japan has never been defeated by any other country except for that time. After the practice, I went to dinner with the members of the club or played games at the captain’s room. As far as I saw all the games were Japanese ones and I realized how popular Japanese games are in the world. When I left, they were very helpful for me in cleaning my room and picking me up at the airport. 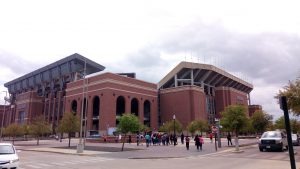 Lastly, it is very stressful more than you imagine to lead daily lives and do research in foreign countries which you are accustomed to. However, I learned that if you overcome such difficulties you can make more progress. If you are thinking about studying abroad or starting your research at Advanced Energy Department, why not jump into overseas? Let’s enjoy research life at the Department of Advanced Energy of Graduate School of Frontier Sciences 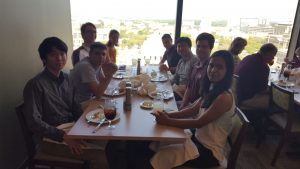